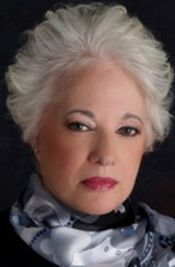 I’ve been going to RT conventions since the very first one at the St. Regis Hotel in New York. Well, not every year, but enough to watch the evolution of this fan and author fest put on by RT Book Reviews Magazine. 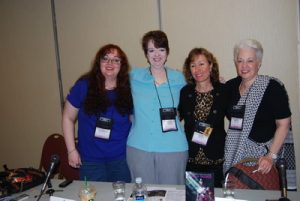 Over the years the whole festival has gotten more organized, featuring panels packed with information, parties sponsored by publishers and authors, and guest speakers from the top ranks of best-sellers.

This year in Los Angeles was one of the best RT’s I’ve been to in a while. For me, the highlight had to be Dean Koontz-who gave two talks.

It’s easy to see why he’s a perennial on the New York Times best- seller list with books like Watchers, Lightning, and Whispers. Those are all-time favorites of mine.

And it turns out he’s a fantastic speaker as well. He kept an audience of 200 (you had to get a wristband in advance to hear him speak, and only that number could) in stitches for almost an hour.

He told us stories about the first “literary” editor he was assigned-for Strangers. The man wanted him to remove four characters from the book but wasn’t prepared to show him how to do it. Instead, he was obsessed by a small detail in the story. One of the characters hid behind the furnace in his garage, and the editor was sure the furnace is always in the basement-even when Koontz told him there are no basements in Southern California. In his zeal to prove himself right, the editor sent Koontz a real estate listing for a house on Nob Hill in San Francisco-with a basement. Of course, San Francisco isn’t in Southern California. Finally Koontz proposed a mocking paragraph for the book, describing a furnace big enough to hide an editor’s 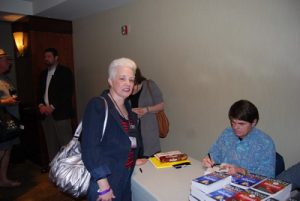 Koontz went on to talk of the trials and tribulations of book tours-where the author must sign for long hours, then eat from a hotel minibar when all the restaurants in town are closed.

He ended with the story of a book party where the bus broke down on the way, and the driver sent to pick up the stranded authors said she was too drunk to find the house where the party was being held. After they finally arrived, Koontz and his wife barely escaped the nu 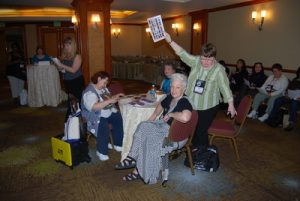 de hot tub party that was supposed to be the centerpiece of the event.

Speaking of parties, there were some nifty ones at RT this year. I loved the Carina mixer where readers got a chance to win an e-reader by going on an author scavenger hunt. Then came the Harlequin party, with great dancing and great food. And another e-reader raffled off.

At the Vampire Ball, I wore my transvestite vampire costume- with some fangs I’d bought at a local party store.

This year, I got to participate in several other reader parties-one featuring writers of category romance. (W 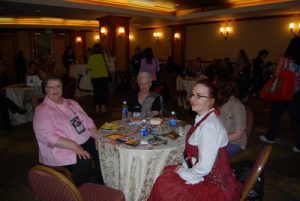 here the game was author bingo.)

And one held by Circle of Seven Productions, Novels Alive, Between Your Sheets and Fresh Fiction.

Fans gave their favorite authors “Oscars,” and I was honored to receive one. 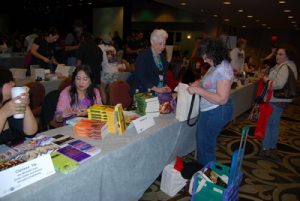 I always love the RT Book Fair where I get a chance to chat with readers. Sadly, with the York name, I’m always in the last row. At least this year, I could stare across the aisle at the cover models.

Something new was an interesting author-generated innovation, Romance Trading Cards. They’re about the size of business cards, with book covers on one side and maybe a picture of the hero on the other. Or anything else the authors wants to showcase.

I collected dozens, and I’m going to get some of my own made in time for RWA.

Connecting with old friends is always a highlight of RT for me. I told Jimmy Thomas how glad I was that he’d started his Romance Covers Web site. What a great idea for authors publishing their own books-and for publishers, too.

I had meals with fantastic authors like Angela Knight, Olivia Gates, Chris Green and Kate Douglas. I had a fun time on the paranormal plotting panel that Angela Knight organized. 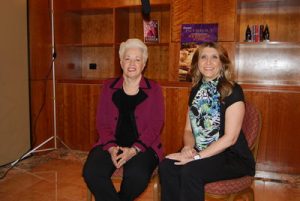 I got to give the Melinda Helfer Fairy Godmother award to Kate Duffy, who sadly passed away last year. I chatted with fans at Club RT. I made friends with the adorable puppy Kathryn Falk was carrying around in a shopping bag. And I ended up doing a cool interview for Novels Alive. Before the long plane flight back to the East Coast.

Readers Entertainmenthttp://dayagency.com
Previous articleNothing Like RT
Next articleWendy Schenck Benson, Author of The Boss of Myself Interview Book Trailer