By: Sheila English
New York, New York
May 24, 2011
Book Expo America, one of the largest book conventions in the United States officially opens today in New York City. Thousands of publishing industry professionals and the vendors who serve them, or want to serve them, congregate at the Javitz Center to show their wares, tell their tales and make their deals. Workshops, networking and the show room floor are the main staples of this three day event.
Yesterday officials of the event held a press conference in which they discussed the success of the event of the last 18 years which they BEA and ABA have co-sponored the large book show. Tom Allen of BEA shares that the mood has changed from ‘troubled’ 2 years ago to more optimism today because of digital opportunities which have expanded ways to get books to people. Indeed it does appear that the book world has embraced digital fully as the event chose to promote a concurrent event; Blog World and New Media which also starts today. 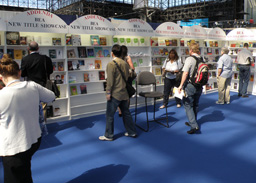 Mr. Allen went on to say that the greatest challenge in digital is still piracy and that the industry needs collaboration across the ecosystem of the industry to help stop piracy. He went on to mention the new and controversial bill currently being presented by Patrick Leahy which would allow the government to blacklist websites. The hope is that websites promoting pirated material would be shut down.
The tone has been set as one of optimism and opportunity.  The events scheduled for this week reflect that as thousands attend and the show room floor fills to capacity.
Share
Facebook
Twitter
Pinterest
Linkedin
ReddIt
Email
Print
Tumblr
Mix
VK
Digg