Washington, DC – Worried about the recent rash of earthquakes? You have less to worry about than the people of Iceland who not only have to deal with earthquakes, but ice quakes as well! Perhaps it’s hurricane Irene that has you worried. If you are trying to stay dry – don’t try to outrun it… you will get 50% wetter running in the rain than you will standing still. You can find these and 300 other Weird but True facts in the new app for the iPhone, iPod Touch and iPad launching tomorrow (September 1) in the iTunes App Store!

The Weird but True iOS app is a fully interactive random fact generator inspired by the popular book series of the same name. With a quick shake, or a simple swipe, you will be entertained and educated at the same time as some of the strangest truths ever to be told. Did you know:

We can’t make this stuff up! Sometimes the old saying is true… the truth is much stranger than fiction.

Along with the collection of facts, you can save your favorites to show off later, or voice your vote on the Weird-o-Meter and see a collection of the weirdest facts as voted on by the users. Facts can be shared via email as well.

Weird but True can be downloaded from iTunes App Stores around the world including from the top of Mt. Everest… where you can get rather clear cell phone reception. That’s Weird! 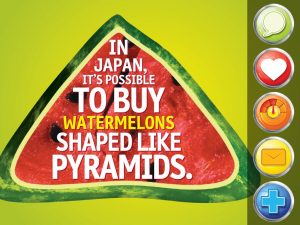 The New York Public Library Launches History Now: The Pandemic Diaries Project To Collect and Preserve the Stories of the COVID-19 Crisis The Library will...
Read more