Lee Goldberg and William Rabkin have been working together in television as producers and screenwriters since the late 1980s, often on mystery series like Diagnosis: Murder and Monk. They’re also both novelists: Goldberg has been writing original mysteries as well as tie-in stories for TV shows for years, and Rabkin recently began writing novels based on USA Network’s Psych. Earlier this year, they launched an e-book venture that combined their various skill sets—a supernaturally-tinged adventure series called The Dead Man.

Goldberg and Rabkin created the character of Matthew Cahill, a man who is resurrected from death, then laid out the basic premises of his role in an ongoing, invisible war against the forces of darkness. After writing the first novel in the series, Face of Evil, they recruited authors from several other genres to produce Cahill’s ongoing adventures, releasing the e-books on a monthly basis.

After releasing five novels themselves, Goldberg and Rabkin signed a deal in mid-September with Amazon’s Thomas & Mercer imprint to take over the publishing end of things. Goldberg and Rabkin will continue to  serve as “show runners” for The Dead Man, working closely with authors on each novel.

“Ultimately, we are the ones responsible for maintaining the consistency of the franchise and turning in great books to Thomas & Mercer,” Goldberg explains; each book is commissioned on a work-for-hire basis, with the authors receiving an advance and splitting royalties with the series’ creators. Although Thomas & Mercer will be paying a lower royalty rate than the 70 percent Goldberg and Rabkin earned while self-publishing, the deal is still “much better than what we would get from a traditional publishing contract,” he says. “In addition, we are going to move a lot more units than we would thanks to Amazon’s marketing and promotional savvy on their own platform.” 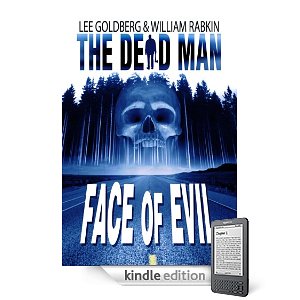 That’s welcome news for Goldberg, who attributes much of the “great” sales for Face of Evil to a guest post he wrote for Amazon’s Kindle blog in which he described how the series was connected to his love of classic “men’s adventure” novels that flourished when the paperback market was in its heyday. “The other books [in the series] were doing fine, but not spectacularly well,” he admits. “Nowhere near what we saw as their potential, based on the amazing critical response and reader reviews we’ve been getting.”

When Amazon’s audiobook division, Brilliance Audio, began negotiating at the beginning of the summer with Goldberg and Rabkin about audio versions of the series, Thomas & Mercer quickly became involved as well. “They instantly understood what we were hoping to accomplish with the series,” Goldberg says. “They saw the potential in it and, like us, were frustrated that it hadn’t been tapped yet.”

Thomas & Mercer will reissue the e-books published so far before publishing the next book in the series, Harry Shannon’s Kill Them All, in November. New e-books will continue to come out on a monthly basis, and Amazon has an option to pick up a “second season” of Dead Man novels once the first twelve have been released. And, in addition to the audiobooks that brought the deal together in the first place, Thomas & Mercer will also publish trade paperback omnibus editions, each containing three novels. “The key is simply making more readers aware of The Dead Man—something Amazon can certainly do and do well,” Goldberg says. “And then we believe the series will sell itself.”