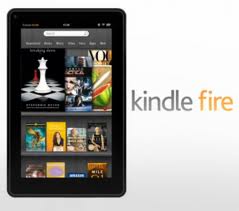 Amazon is on fire, literally with their new Fire Tablet. The Fire is a new device intended to compete with the iPad. It enters the market at a lower price then Amazon’s Kindle. Looking at the specs on the Fire, readers will still have the ability to download books, but it also gives you the option for movies, TV shows, music, sending e-mail, reading documents in multiple formats, and storing all of your items in the Amazon Cloud.

eBook sales have seen significant increases in sales, particularly over the last year. With the introduction of the Fire, and the price drop to $99 oo the Kindle, eReaders are now becoming more inviting to mainstream consumers.

With the Fire’s introduction, several retailers have already cut their price on the Blackberry Playbook and the HTC Flyer. More drops are expected as the holiday buying season descends.

The Fire does have some critics. PC World called it: “less of a ready-to-use tablet and more of a targeted companion for Amazon’s content and Cloud services.”

Publishers note that the Fire does not support EPUB or EPUB3. This means that books with more interactive features, such as music or video won’t work on the Fire, books that currently do work on the Kindle. It is shipped with 8GB of memory which means heavy users of video and music will have to be selective in what they store on their Fire. According to Amazon’s web specs 8GB will hold: “80 apps plus either 10 movies, or 800 songs or 6,000 books.”

There are some very good points about the Fire. Current Kindle customers will be able to access all their user purchased content via the Cloud. Amazon has created a new web browser for the Fire called Silk. Early reports are that is does a good job of streaming content. The Fire does have Wi-Fi, but it is not listed as free, so one should assume there will be a charge. At this time, 3G is not offered with the Fire.

Considering their market entry price of $199, the Fire is a very good deal, and looks to be a game-changer in both tablet pricing and eReader / eBooks sales.

Readers Entertainmenthttp://dayagency.com
Previous articleA Soldier and a Romance Writer: An Interview with Jessica Scott
Next articleThe Security of the World Now Depends On These Two…